On Jun 25, 1965, Patricia’s masts and gear were removed and given to the STV Pathfinder.  The sails were used on Pathfinder until 1977, when the last of the re-cut sails “blew out”.

P-Class Sloop Patricia was owned by RCYC’s Past Commodore Thomas K. Wade, OBE ‘s owned P-Class Sloop Patricia, designed by George Owen, and launched in 1912. (see photo on page 26).   TK Wade was a member of RCYC since 1902. TK Wade passed away suddenly on Jan 20, 1965. His beneficiaries had requested that the yacht be dismantled and sunk in Lake Ontario and created the “Patricia Memorial Fund”.

Then Commodore Paul Phelan honoured the memory of Pat Commodore Wade and Patricia at Sailpast 1965, taking the fleet’s salute from Patricia – that was May 22, 1965.   On Sunday Jun 27, Patricia was towed into Lake Ontario and sunk in a simple ceremony. Ben Colenbrander and Gordon Nortone were on board to open her seacocks. Cannon Guy Marshall, captain of the Mission to the Seaman for the Port of Toronto, Officiated. Oswald K Schenk donated his painting of Patricia to RCYC.   Pathfinder sailed as afterguard in the RCYC Sailpast that year. 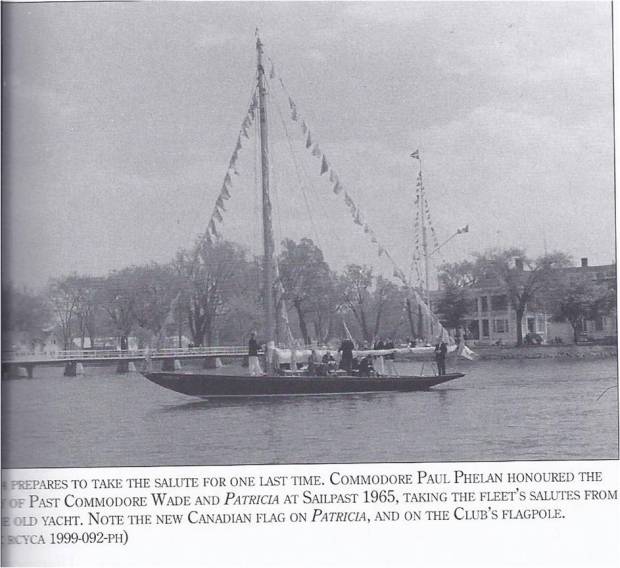 Youth Sailors Wanted to Sail Pathfinder and Playfair this Summer

Setting Sail for Ports of Call on Great Lakes and Georgian Bay www.torontobrigantine.orgJuly 2nd, 2014
Teenagers wanted to sail the tall ships. Spots still available for the Summer 2014 season. The boats are traveling Lake Ontario, Lake Erie, Lake Huron and Georgian Bay. One and Two week courses to choose from. http://www.torontobrigantine.org/summer-program/schedule-and-fees/

Error: Twitter did not respond. Please wait a few minutes and refresh this page.