Doug Hunter was a TBI Alumni from 1965-1969.  He sailed aboard the NONSUCH – not sure how much of the journey that he sailed. But what a fascinating chance to participate in a historical event like this. 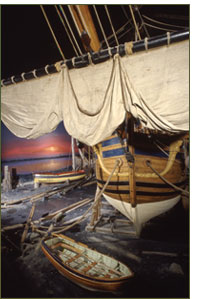 TBI inherited Nonsuch‘s  day boat “Shallop”  that was used for a while at Waupoos Island.  The Nonsuch sloop was in TBI’s possession from August 1971 to November 1974, when it was shipped to the Manitoba Museum in Winnipeg.   The diesel engine from the Shallop was later used in “Pursuit” which was used as the ferry boat for Waupoos Island.

The records of the Nonsuch replica, including Adrian Small’s logs, are available at the Hudson’s Bay Company Archives, Archives of Manitoba.  These records were donated to HBCA by HBC in 2007

Youth Sailors Wanted to Sail Pathfinder and Playfair this Summer

Setting Sail for Ports of Call on Great Lakes and Georgian Bay www.torontobrigantine.orgJuly 2nd, 2014
Teenagers wanted to sail the tall ships. Spots still available for the Summer 2014 season. The boats are traveling Lake Ontario, Lake Erie, Lake Huron and Georgian Bay. One and Two week courses to choose from. http://www.torontobrigantine.org/summer-program/schedule-and-fees/

Error: Twitter did not respond. Please wait a few minutes and refresh this page.